It is with sadness that Bill Flynn - the Founder of W.M. Flynn Pty Ltd  passed away after a short illness at Nazereth House, Ballarat  on Friday 11th October, 2013.

We will miss his excitement to work, his amazing work ethic and his love of the Company and its successes.  May he Rest in Peace.

Peter, Carmel and the team would like to thank all those who have sent condolences and very much appreciate the kindness shown towards them at this sad time.

We would also like to thank the Ballarat Courier for the articles below.

BILL Flynn, a valued and influential man throughout the region who contributed to the community in every sense, died on Friday evening.

His son Peter Flynn described his father’s three pillars of interest as the community, business in the region and his church.

Bill was awarded an Order of Australia Medal in 2011, honouring his commitment to the Ballarat community.

Peter worked alongside his father for 20 years at their family-run commercial and industrial building business W.M Flynn, which Bill began in 1950.

“Few people get the pleasure of working alongside their father,” Mr Flynn said.

“Over time, he handed down an incredible amount of knowledge ... it was enriching to be guided by him.

The business was awarded Commerce Ballarat’s inaugural Business Achievement Award in 2011. Bill was on the council for the Shire of Ballarat for 18 years, including serving as shire president twice, before his position terminated when the shires amalgamated under the Kennett government.

Born in Ballarat and having grown up in Dunnstown, Bill educated himself after primary school.

“He was brought up in Dunnstown and didn’t have much of an education – but he had lots of drive. He was very motivated and liked being in charge,” Peter said.

“He started life from humble beginnings and was able to make a life for himself. He started his own business and brought up a large family.”

Bill had been married to his wife Mollie for more than 53 years.

Peter was the third eldest of Bill’s six children, with only one girl in the mix. Bill also had nine grandchildren.

Bill, aged 82, died peacefully at Nazareth House on Friday, where he spent the final three months of his life.

A VALUED member of the community, Bill Flynn was farewelled by friends and family yesterday.

The funeral of the former president of the Shire of Ballarat was held at St Patrick’s Church in Ballarat, where the crowd listened to anecdotes as people said goodbye to the influential businessman.

The eulogy was read by Peter Flynn, the third eldest of Bill’s six children, who worked alongside his father in the family business WM Flynn for more than 23 years.

Peter reflected on his father’s community achievements, strong work ethic, loyalty to the Catholic Church and his love of his family.

Bill is known for his many community achievements and was awarded an Order of Australia medal last year.

Son Ron Flynn spoke about going for drives with his father.

“I used to love driving places with him and the places we’d go through he’d always comment on buildings, saying, ‘I built that in 1965’ or these people live there and did you know this and this about them,” Ron said.

“He had a love of people and places, and I think as a family we all got a love of travelling from Dad.

Daughter Eileen Flynn said her father brought the family together growing up with things like ‘Saturday night chocolate’, which became abbreviated to SNC.

Son Dan Flynn, reading from a statement from the eldest grandson Daniel Flynn, said his grandfather’s relationship with his wife Mollie had set a good example for how he now treats his wife.

Granddaughter Sarah Flynn brought up symbols representing Bill’s life that she placed on a table, including his OAM, building helmet, wedding photos, a gavel, his lifetime business award and a Collingwood scarf. 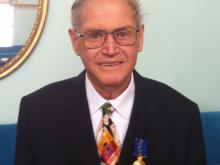 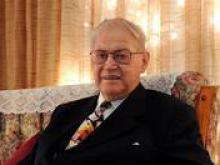 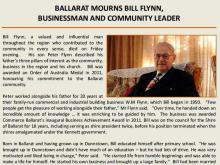