BRIGHT: Junior pupils from Our Lady Help of Christians school in Wendouree were enjoying their new building earlier this term before remote learning resumed. Picture: supplied

Former Our Lady Help of Christians school student Peter Flynn took great delight in knocking down classrooms at his old school, though they weren't quite as big and imposing as he remembered them.

But in replacing the old boxy classrooms with a contemporary new learning space Mr Flynn, through his family construction company WM Flynn, has added not just a new space for the OLHC community but another element to his family's legacy at the school.

Before remote learning, the foundation, grade one and two students were enjoying their new classrooms, curved breakout spaces and nooks for small groups highlighted by brightly coloured windows.

"The irony is it was exactly 50 years on from the day I arrived there in 1968 that I had the contract to demolish and refurbish the building," Mr Flynn said.

He attended the school from 1968 to 1975 along with his five siblings. His father, who founded WM Flynn, was involved in the relocation of an old army hut from Ballarat Airport to the school to be its first church, and in the 1970s he built some of the classrooms.

Until demolition, not a lot had changed from how he remembered the school.

"It felt funny going in to demolish what I remember as a child being large imposing classrooms which, when you go in as an adult, are not so big and imposing," he said.

OLHC principal Leigh Bradshaw had no idea when the contract was awarded that the WM Flynn construction company had such strong links to the school.

"When he won the tender the first time he came through he said this was his prep classroom, and that ended up being our staff room. He could tell lots of stories about the school and what he and his brothers would get up to."

When OLHC was first built, schools were a series of large classrooms set off a central corridor but new school architecture is about creating different spaces for children to learn in large groups, small groups and individually.

Plans are underway for the next half of the school to be rebuilt to provide modern learning spaces for middle and senior students.

"This is the space our kids deserve in Wendouree. We have a big diverse community and quite a lot of families do it really tough so to have a space so beautiful and fit for purpose for the kids make it really happy and warm."

Staff have also noticed children are calmer in the new building and learning can be more personalised.

"The building makes it possible to have small groups working in lots of different spaces and there are nooks and places for small groups out but maintain supervision across the classroom," she said.

"Wendouree does do it a bit tough Ballarat-wise. People have a view of what they would expect north of Howitt St and my experience as principal is because the school is set back from the road lots of people don't realise the school is here.

When they do realise and come in, now they see a space that they can see their family growing in."

When public gatherings are allowed, Ms Bradshaw wants to hold an official opening and plans to invite high-profile former students Mick Malthouse and Michelle Payne to be part of the day, along with other high achievers who have attended.

"We need to aim high for these kids so they can see what education can do for you to be a part of the community." 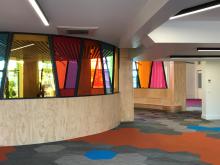